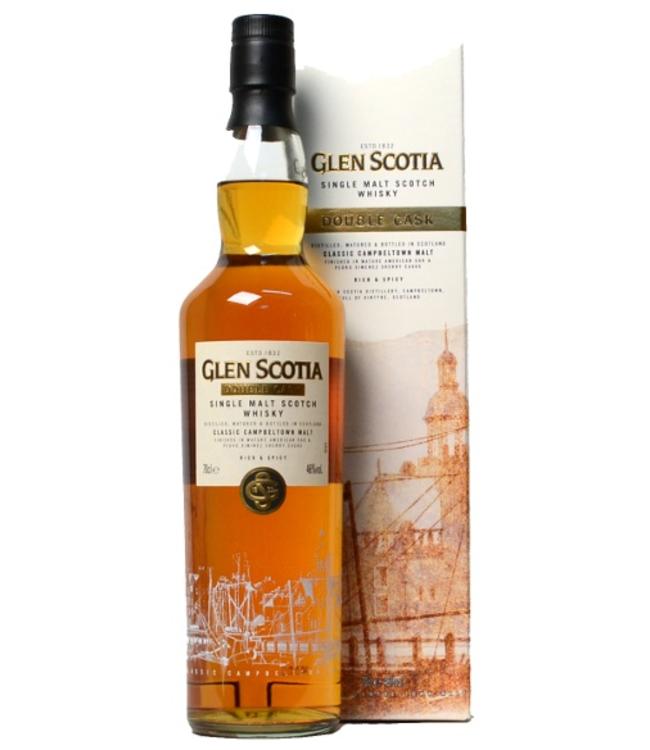 Glen Scotia Double Cask is a classic Campbeltown malt with a great history of whiskey since 1832. The whiskey is finished in a combination of new bourbon barrels, with after a while Pedro Ximenez sherry casks, the combination creates this remarkable malt whiskey, with a perfect balance of full spicy fruit, under a layer of typical sea spray and the like vanilla oak finish where Glen Scotia is famous for.

Nose:
Amber. Very sweet. At first it's all creme caramel, caramelized fruit sugars, wood sugar, toffee and fudge, before coming through some apple and peach. Over time, a smoky tone of bourbon with a pleasant dusty dryness. That's what powerful.

Taste:
Sweet start, rather fat and although the alcohol creates a buzz with tingling on the tongue, the result is a good weight of the middle range. The dry distillate character is still there, but there is some depth at. Water show some more different elements, but also add dried mint.

In the notorious Victorian era whiskey region Campbeltown was the epicenter of the whiskey industry in Scotland. At the time, there were no fewer than 30 distilleries in the region. Over the years, however, much has changed and there are many distilleries closed on the peninsula. Closing the many distilleries in conjunction with the kleinde supply and high demand has led to a shortage came to the whiskey with the salty nose. Campbeltown is an isolated place, far from civilization and unique from the other areas in Scotland. The whiskey is distilled here in turn is also unique and not comparable to those whiskeys from Speyside, Highlands, Islay and Lowland. Although there are currently only a few distilleries are active in Campbeltown style is quirky and has a unique- and individual character. Due to the uniqueness of the Campbeltown region classified as one of the five regions of Scotland. Each region has its own characteristics and specific nature as well as the whiskey from the Campbeltown peninsula, where only three distilleries operating at the moment.

Glen Scotia, founded in 1832, is one of those three distilleries. It is also one of the smallest distilleries in Scotland. The craftsmanship and love of life water is still visible at Glen Scotia. Each vessel is currently selected and approved by the Master Blender, John Peterson. The distillery Glen Scotia is almost in the same condition as it was in the 19th century when the then owner Duncan MacCallum has patched the distillery. An idyllic place that does allow faster beating heart of many whiskey enthusiasts.